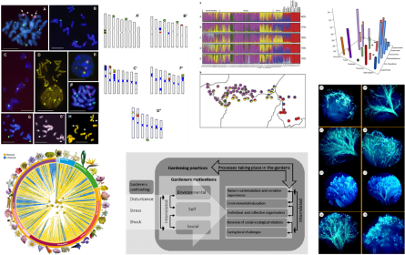 The DEP team conducts fundamental research in the field of plant evolution at different taxonomic levels.

These questions are organized into three axes: (1) Evolutionary drivers of plant adaptation and species diversification; (2) evolution of angiosperm pollen and flowers; (3) description of flowering plant diversity to improve our knowledge in relation to the taxonomy and systematics of these organisms. 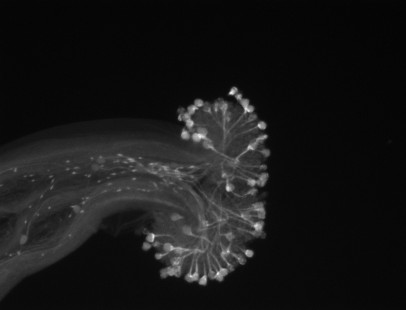 Knowledge of the genetic bases and evolutionary drivers of plant adaptation to local environment is a major issue in evolutionary biology and has strong implications in ecosystem conservation and agrobiodiversity valorisation.

Evolution of pollen and flowers

Pollen grains in angiosperms are morphologically highly diverse. Our character of interest is the aperture type, which is defined by the number, shape and position of apertures. Apertures are defined as zones where the pollen wall is thinner or even absent, and have the double function of allowing pollen tube germination (which in turn allows fertilization of the female parts), and exchanges between the pollen grain and the environment. We explore the developmental and selective processes leading to variation in aperture types. We are also interested in the phylogenetic distribution of this diversity.

The flower is a key innovation of the most diversified group of land plants, the angiosperms. Beyond a highly conserved basic groundplan, they present an amazing diversity that is believed to have been largely shaped by the interaction with pollinating agents. Using a variety of approaches combining ancestral state reconstruction, diversification rate analyses, developmental floral biology and evo-devo studies, we aim to unravel (i) the diversification patterns having led to the observed diversity of flowering plants, (ii) the patterns of floral trait evolution, and (iii) the developmental and genetic bases of floral trait diversity.

Despite the accelerated loss of biodiversity observed since the second half of the 20th century, it is assumed that c. 400 000 species of plants still inhabit the planet; but knowledge on this diversity is largely fragmentary. This is particularly true for the tropical and subtropical regions of the globe that are both species-rich and strongly impacted by the destruction of the natural habitats and the global climate change.

To progress on the general knowledge and preservation of this fragile and exceptional diversity (1) we describe and analyse species morphological and ecological patterns (species descriptions, publication of floristic treatments and identification keys), and (2) we reconstruct phylogenetic relationships for various groups of plants. This work contributes to the continuous update of the phylogenetic classification of life (systematics) and to the knowledge on the state of biodiversity; this information is key to the global policies towards preservation of the natural heritage.